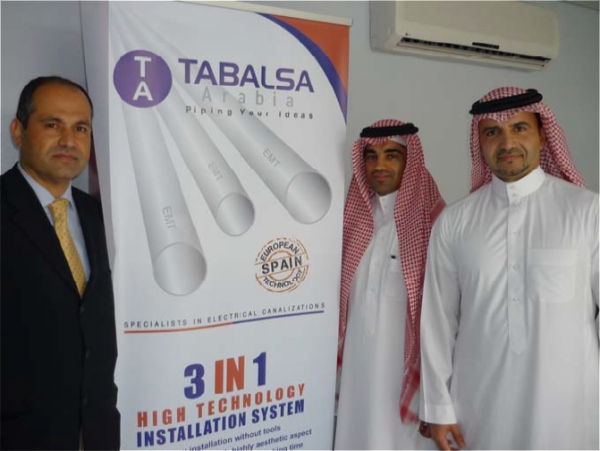 MENA Business Investment Group has coordinated the implementation of TABALSA INVESTMENT GROUP (GTI) in Saudi Arabia. The new company is alled TABALSA Arabia and is a 50/50 joint venture between GTI and Eastern Trading & Cont Est (ETE).

The new joint venture will focus on local manufacturing and marketing of steel pipes for electrical installations. To achieve this objective, Tabalsa Arabia built a factory with 3500 m2 in the Second Industrial Area DAMMAM (Saudi Arabia).

On December 21 2009, the factory was inaugurated with an event in which prominent people have attended, like banking representatives, Distributors of building materials and large construction companies. This factory is the first to be launched in the Gulf area.

According to the General Director of the Group, Bartomeu Cucurull Llobet, the agreement between GTI and ETE contemplates the expansion of that business activity in Saudi Arabia, UAE, Qatar, Bahrain, Kuwait y Oman. Likewise, in its positioning strategy internationally, in those economies where it is planned this growing demand, GTI has been developing its business in Europe with distributors in Germany, Belgium, France and some Eastern European countries.

With this agreement, GTI, with the collaboration of MENA, opened his second international route expansion in the countries of the Middle East, and started their activity on a second continent. On the above basis, TABALSA plans to continue their development in each of these areas of the planet and explore other possibilities to complete their strategic position.

ETE is a great Industrial Corporation founded by Mr. Ali A. Bu Khamsin owner and current Chairman of the group, having established a company dedicated to construction and he has diversified his business portfolio, available now transportationrelated businesses, metal and steel, and galvanized products and aluminium products, quarries, cement, real estate, and several operations of joint venture with Spanish companies. ETE has an annual turnover of 200 million euros and more than 2,000 workers.

Bartomeu Cucurull add that, with the shared management with local partner, the company will acquire the know-how of TABALSA and COMMERCIAL Fergon, which are GTI's Spanish subsidiaries, being the leading companies in the Spanish market of Galvanized Steel Tube and PVC pipe manufacturer, and all type of accessories. The company has distributors in Spain and Europe.

MENA Business Investment Group, S.L. (www.mena-big.com) is a Spanish company with Head Quarter in Barcelona specialized in strategic consultancy of international business development between Spain and Middle East (Specially the Gulf States), with offices in Barcelona, Dubai and Saudi Arabia and with infrastructures and network of contacts and partners specialized in every country of the activity zone.